From the moment European colonists laid violent claim to this land, hurricanes have had a profound and visceral impact on American history— yet, no one has attempted to write the definitive account of America’s entanglement with these meteorological behemoths. Now, bestselling historian Eric Jay Dolin presents the five-hundred-year story of American hurricanes, from the nameless storms that threatened Columbus’ New World voyages, to the devastation wrought by Hurricane Maria in Puerto Rico and the escalation of hurricane season as a result of global warming. Weaving a story of shipwrecks and devastated cities, of heroism and folly, Dolin introduces a rich cast of characters, including Benjamin Franklin, Ernest Hemingway, Katherine Hepburn, and Steven Spielberg, and puts us in the middle of the most devastating storms of the past, none worse than the Galveston hurricane of 1900, which killed at least 6,000 people, the highest toll of any natural disaster in American history. A necessary work of environmental and cultural history, A Furious Sky will change the way we understand the storms on the horizon of America’s future. To learn more about this book, and its author, please visit www.ericjaydolin.com.

This event has been sponsored by the Friends of the Rockport Public Library.

Eric Jay Dolin’s books are available to borrow from the library and available to purchase from The Bookstore of Gloucester.

Registration is required. Registrants will receive Zoom access information prior to the event in a later email. 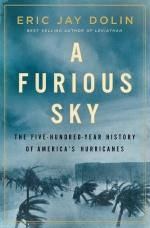