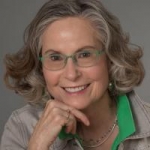 Enjoy an evening with Cheryl Suchors, author of “48 Peaks, Hiking and Healing in the White Mountains”. Cheryl grew up in Southern, Eastern and Mid-Western US. She grew even more living with a Mexican family one summer in high school and spending her junior year of college in Spain. She is a proud graduate of Smith College in Northampton, Massachusetts.

After getting an MBA from Harvard she became, in succession, a management consultant, telecommunications officer, partner in a national accounting and consulting firm, and president of her own small consulting company.

Then she found the courage to launch her second career as a writer. She’s published short works and poems. She has recently authored a book, 48 Peaks, Hiking and Healing in the White Mountains.

At forty-eight years old, Cheryl vowed to summit the highest forty-eight peaks in New Hampshire’s rugged White Mountains to help her find success during a career transition. She discovered, in the years that followed, that in order to feel truly successful, she would have to do much more than tick off peaks.

Cheryl lives in the Boston area with her husband and a plethora of plants. In their spare time they visit their daughter, travel, and engage in political activism.